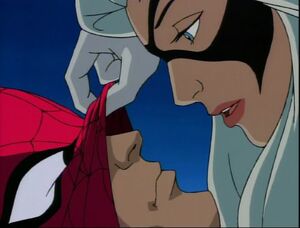 Summary: Black Cat and Spider-Man catch up over a bottle of Crimefighting Justice.

Oh, Manhattan. It's just so convenient when architects build these multi-storey complexes. Hanging upside down and rappelling down the side of the building, Black cat drops off on the large balcony of the one home she has claimed as her job for the night. She's not too worried about keeping her line dangling as her means of escape. She has other methods if she's discovered. She approaches the door to the balcony and prepares to use her claws to cut into the door when she notices that the door's already ajar.

That's when the yelling and shooting starts.

And then the alarm goes off.

The classic Spice Girl hit is being ruined by the Masked Menace himself: The Amazing Spider-Man! He's swinging in from the North, having started his nightly patrol and making sure to sweep through the rich part of the neighborhood first. It is, after all, where most of the crime is going to be happening.

The song fades into a bit of a whistle at the moment he comes swinging around and into the vicinity of where the action is about to begin. He's already being snatched by his Spider-Sense in the direction of the Home, the tingling at the back of his neck causing him some annoyance factor. "Never a dull moment. I swear, I should be Tweeting about this right now."

The Spider's webline is attached to the side of othe building in question by the time the alarm goes off and he's already swinging up and firing off twin weblines to take him up and over the balcony railing. He, at the moment, has no idea that there may be someone else on the balcony at this very same instant!

So much for her plan. Cat kicks over a metal table the residents kept on the balcony and ducks behind it just in time for people to show up: three men in face-covering masks and weird suits that seem to have bat-like webbing that link the arms to the torso and the legs together. The result is a bit of a shuffling walk. But hey, they've got the guns, and they force a couple out by gunpoint. One of the men is hauling out three small bags. They just took the most valuable things, from the looks of the size of those bags.

Plan?! Spider-Man don't got no stinkin' plan! He's just kind of going with the flow, it looks like, at this point. Those weblines catch the railing of the balcony and soon enough the Spectacular Spider-Man has launched himself up and into the air above the gunmen and the couple that's being forced out by gunpoint!

"Well! Don't you three just look cute in your widdle matching outfits?! Awwwwww!" Spidey's quip comes flinging out of his masked mouth, even as his wrists are brought up for aiming purposes. "Say Jailtime!" One by one there's a shot of webbing sent flying at the masked faces of these gunmen, clearing aiming to give them a sticky visual situation to deal with, while Spider-Man somersaults himself into a very stylish and ever so Crouching Tiger landing pose!

It just so happens that he's facing away from said metal table.

There's the usual yelling and shouting, the 'get him!'s and the 'ARGH!' as one goon gets webbed to the face. The eyeholes of his mask plugged he stumbles back, tugging on the webstuff. The bags are dropped to the ground. With the remaining two men focused on Spider-Man and the couple fleeing back into their apartment... Black Cat lunges. She leapfrogs over the overturned table (and Spider-Man, incidentally) to tackle one of the men to the ground. He shrieks in surprise as her claws dig through his 'matching outfit' and draw blood.

That would be Spider-Man trying to get it on with the introductions at this very moment, as he's in the middle of trying to stare the holy heck at the 'panther' that's attacking the poor goon, while looking in the direction of the other two. "You. Sit." A webline is shot out at the ankles of the web-faced goon, in an effort to yank him off his feet and pull him off in the direction of the railing.

At the same time, Spidey's body is flipping up and backwards, sending another webline from his free wrist towards the remaining gunman's firearm hand to yank that dangerous weapon from his hands!

"Mind knockin' that other guy senseless for me, while I wrap this up over here?" Yeah the sailing, web-yanked guy is about to get hung from the railing, just for kicks!

Cat sighs, shaking her head. "Act like a proper thief!" she scolds as she introduces him to a right cross. He drops into unconsciousness quickly. "Got a gun and still yelling like a little kid." She bounds off the man neatly landing right where the bags were dropped. Now it would be oh-too-obvious if she made off with their goods, but her hand does dive into the bag and palm whatever she can latch onto.

The other too men drop like a nun dropping a bad habit (garb or behaviour, take your pick!) and are both soon in the uncomfortable land of "I was beaten up into unconsciousness".

Cat straightens, watching the webhead 'wrap things up' without a word until finally, he seems finished.

"You sure do have good timing, Spider," she almost purrs. "One day you'll have to show me that trick."

"No can do, Cat. It's a Spider-Man trademark move. My lawyers would sue your pants off." Spidey quips, as he perches on the railing and props his head in his palm. His eyes are peering at her from behind his mask, as if he already knows she's yoinked something. But he's not even going to question her about it right now.

"So what were you doin' here? Because I just know you weren't here to break into these nice people's home and make off with expensive items that don't belong to you. Riiiiight?" That would be Spider-Man trying to make sure that he's pulling rank on this way too hot for words female. After all, he's fraternizing right now. He can't be doing that with a criminal!

Black Cat looks about as innocent as she can. Wherever she stuffed whatever she took, it's not obvious and the items aren't in her hands. "I have no idea what you're talking about," she insists. Thank goodness he's not Daredevil. "I was just passing by. I heard a gunshot and found you crouching in front of these people." Well, she wasn't immediately and obviously there when it broke out, right?

Spidey raises an eyebrow beneath his mask, as if trying to make it clear that he's not buying it. But then he's wearing a full on face mask so it's probably not going to come across as much as he likes, so his body shifts into an arm crossed and head-tilted manner. "Uh huh. The only time you're ever 'just passing by' is if you're looking for something to pilfer. Yes, I know I just said pilfer. I'm trying on some new vocabulary words." With a quick hop, Spider-Man is landing in front of Black Cat and shaking his head at her. "Don't lie to me, Cat. I know what you do. I'll take you in if I have to."

The smile that plays on Cat's lips shifts between amusement and playfulness. "New words?" she asks, looking impressed. Or feigning it. "Girlfriend buy you a thesaurus for your birthday?" she asks, eyebrows lifting to accentuate the question. "Oh come on," she almost-whispers, leaning forward. Her gloved hand reaches out, tapping Spider where his nose should be. "If you had anything on me I might just believe that."

"Then I guess you won't mind if I return these things to the rightful owners then, hm?" Spider-Man doesn't take his eyes off the Cat, even as he uses a webline to snatch up the bags of goodies and fling them back inside the house. It's much easier to talk to a thief when they aren't being distracted by the fact that 'free stuff' is just lying around in the immediate vicinity. "And no. No one's bought be a Thesaurus. I know it may be hard to believe, but I am not Jessica Simpson under here." Spider's probably smiling at this point. "She /wishes/ she had this butt." Spidey offers a shrug next. "Just stay out of trouble, okay? If I wasn't here, something could've happened to you. And then where would I be?"

"Begging some poor girl to wear leather for you, no doubt." Later, the couple will discover that are short on a wad of bills that the goons initially had in their bag. But with the rest of their possessions and their lives, what's a few bills? Black Cat watches as Spider-Man turns around, her eyes drifting downwards after that butt comment. "Hey." She's behind Spider-Man then, and when he turns around one of her gloved hands is on his mask, pulling it juuuuust high enough to reveal his mouth. "Don't worry. I'm not that nosy. Curiosity and cats," she murmurs. But she leans in and places one little, brief kiss on those lips. "And I won't tell anyone you were concerned." She winks and starts to move to the balcony's edge. "Face it Spider, without me, you'd be bored. And without you... well, this city wouldn't be so much fun, would it?" She dives off the balcony neatly, the telltale metallic thwonk indicating her grappleline has been fired.

Spider-Man, normally, would give chase. But there's more patrolling to do at this point. And he's not sure what will happen if he gives chase... considering what just happened to his lips a mere moment ago. He takes off in quick-step to the balcony edge and raises a fist. "You call this city fun?! You really need to stay in more! Watch some television! Do something unproductive!" Spidey just continues to yell at the Black Cat, before turning and pulling his mask back down over his smiling face.

"Get off our property!" Yeah, that's a shotgun. Looks like half of the happy couple has had it with bad guys tonight.

Spider-Man sighs and shakes his head. "This. This is what I have to put up with." He falls backwards and off the balcony, extending a webline and swooping low to get clear of the building. "You're welcome, by the way!"

Retrieved from "https://uumux.fandom.com/wiki/2010-08-16:_Caught_Up?oldid=4425"
Community content is available under CC-BY-SA unless otherwise noted.