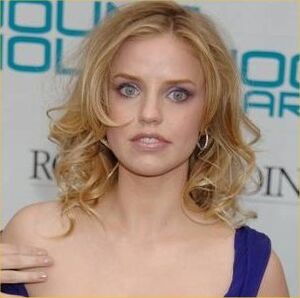 Bambi Malone, born Margaret Larson, is an up and coming international actress.

Socializing - Can't be a party girl without being something of a social butterfly which she is. She's awesome when it comes to chatting people up, flirting and everything else one does when putting on a public face.

Actor - Although she's an up and coming starlet she has already been lauded as this century's actress to watch. Already having starred in one big movie and several other lesser known films, it's safe to assume she's good at what she does.

Driving - One little known thing about this young lady is that she's quite the speedster. Having begun racing lessons, she aspires to be the world's next best woman open circuit driver. She knows the basics of how to drive fast and turn corners while doing so, among other things, but she's still a rookie and not as good as the pros.

SAG card - Bambi is a card carrying member of the Screen Actors' Guild. This entitles her to the same rights and protections that all the SAG members are afforded.

Personal Wealth - She's not making millions upon millions per film like some of the more popular actors and actresses do, yet, but she has still managed to make a tidy sum of money even then. She has several homes, one in Los Angeles, an apartment in NYC and probably several more throughout the world, more than one expensive car and even a private plane. She also has an extensive wardrobe, staff....yeah, she's not hurting for money to pay for all this stuff, let it be left at that.

Entourage - She has people. They might be mostly hanger-oners and ass-kissing brown-nosers but they're still hers. Important when it comes to making her look special and someone everyone wants to know.

Contacts - The most important people in Bambi's life are those people who can hook her up with acting jobs or let her know when a coveted roll is in need of an actress, auditions are to be held, etc. These are the people she holds close to her.

Drug abuse - Hollywood is full of bad influences. Some are just bad while others are people who mean well but still lead a girl astray via temptation. With Bambi it was due to her having been pestered about her weight. Being a bit 'chunky' as a girl, she was told she had to lose fifteen pounds before she'd be given a job on a TV show as a bit part character. Desperate for the job, she took to snorting coke in an effort to shed the excess weight that was plaguing her. It because an addiction which she still struggles with even though she has tried to quit several times. Also something of a booze hound even though she's underaged.

Trouble Magnet - How a single person can get into as much trouble as she does but she does. With the law...critics...even her parents. And that's just tip-of-the-iceberg stuff. Poor girl just can not catch a break when she isn't in front of the cameras.

Naive - She grew up in the middle of BFNebraska on a farm where people don't exactly get a broad world view. Because of this, Bambi doesn't exactly know how things really are and even thinks that almost all people are good and have her best intentions at heart. It's a lesson she'll undoubtedly learn eventually.

The first thing that people see is the superficial stuff that lingers on the surface. The selfishness and the desire to have all eyes focus on her, the stereotypical spoiled starlet. Add to it the fact that she's an airhead and she's pretty mouthy and bitchy makes her come across as one of those people you really don't want to spend more than a few moments with. But if someone were to actually get to know her they'll discover she's a naïve, scared girl who is probably in need of more than staff and brown nosers in her life as well as someone who, despite it all, a little girl who still believes in romance novels and fairy tales.

Retrieved from "https://uumux.fandom.com/wiki/Bambi_Malone?oldid=4887"
Community content is available under CC-BY-SA unless otherwise noted.