Felicia Hardy is a wealthy socialite that lives in Manhattan. She doubles as a rather lucky cat burglar known as Black Cat.

Felicia Hardy is the daughter of Walter and Lydia Hardy. They were a wealthy family living in Queens, primarily thanks to the old money that Lydia came from. Walter was a cat burglar by trade, but his family believed he was a business man, as he claimed to be going on "business trips" whenever he left to plan and perform a job. Walter spoiled little Felicia and taught her if she ever wanted something, she should take it. When Walter was arrested and put in jail, Lydia told Felicia that he had died in a plane crash. Taking over as the primary parental figure in Felicia's life, Lydia pushed her to be perfect in everything she did, leading Felicia to take up athletic activities in school, such as gymnastics and cheerleading.

When she was older, Felicia stumbled across articles that spoke of her father as a burglar and finally realized he was imprisoned, not dead. One day she was mugged, and that incident - and the rush of adrenaline that followed - saw Felicia take up self-defense classes, such as the Goju-Ryu style of Okinawan Karate. As a student of Empire State University, she received a sizable sum of money from her mother and used it to move into a stylish penthouse in Manhattan. As well, she used a portion of this money to procure a vehicle and the necessary materials for the next part of her plan.

She donned the identity of the Black Cat as a way of following in her father's footsteps. She managed to balance her studies, a social life, and her training. Amongst the students of ESU she was known as "Party Hardy" because she loved a good time, a good party, and she threw great parties at her penthouse. Somehow, despite this, despite her training herself in stealth, lockpicking, safecracking, and other assorted skills, she still held up on her studies. She still passed tests, exams, and handed papers in on time. There was her mother in her: be perfect, or don't bother doing anything at all.

She designed a costume for herself and took on her dad's name with a twist. She called herself the Black Cat. She outfitted herself with claws in her gloves and grappling lines as well, letting her navigate the rooftops of Manhattan with ease. Knowing that eventually a high profile burglar would attract the attention of hero-types she started setting traps at any location she was robbing. This served to build the reputation that crossing her was bad luck - just like her namesake.

After a particularly bad job where the cops and shot at her during her escaping, causing her to fall and nearly injure herself severely - luckily she caught herself using other grappling line - she decided that skill was just not enough.Through connections that she had gradually made in the criminal underworld, Felicia eventually found someone who offered to financially back an experiment that would grant her superhuman capabilities. This experiment would be based on the genetic research of Doctor Farley Stillwell. Agreeing, Felicia underwent the treatment which enhanced her agility, strength, balance, senses and gave her a "bad luck" field which affected those trying to harm her. The individual behind the experiment revealed himself to be New York City's Kingpin of Crime and forced Felicia to work for him in exchange.

Eventually, Felicia would rebel against Kingpin's control, violently attacking the goons that she was working with during one job, leaving them unconscious and tied up to await the arrival of the NYPD. As Kingpin had not thought to find out her true identity, her civilian identity and her family, at least, were safe from reprisal. As the Black Cat, however, she learne dto stay constantly on guard whenever she went out, for the Kingpin was not happy she escaped his grasp.

Now, she flies solo once more. More than once she has run into Spider-Man while on a job, and though their encounters are sometimes flirtatious (on her part) and though she might consider their interactions a game and part of the thrill, in the end Felicia knows that she cannot afford to let the webhead capture her and so constantly has to give him the slip in order to continue anew another day.

Felicia Hardy is perhaps what everyone expects from a woman that has defined herself as a socialite after leaving university. At least, a socialite that proves she's not lacking in the intelligence department. She's smart, has a good sense of humour, and a perpetual flirt, despite always seemingly single. Perhaps surprisingly, she is more than willing to socialize outside of her social circle (how else would she know Peter Parker?) but others does things like attends the right functions, charities, and the like as one might expect of someone of her station.

Now, while all that really is Felicia, it also acts as a mask to disguise the fact that she is a thrillseeker deep down inside. The placid existence of everyday life is just not enough for her. Committing crimes gives her that thrill that she is otherwise missing in her life. It comes from the possibility of getting caught, from taking something that isn't hers and, lately, from the chase. Stealing is also her way of psychologically compensating for what was stolen from her once upon a time - her father. It also helps fund the life she leads, which admittedly, she does enjoy. She very much likes the finer things in life, and she likes being able to share these things with her friends. Crime makes this continued life possible.

She has been known to crack wise as the Black Cat, especially when dealing with Spider-Man, who is known to crack wise himself. Although with Spider-Man, this tends towards flirtation, even if she knows her won't answer her. The goal here, of course, is to fluster him, even if she finds she is growing fond of the webhead. Felicia's costume as the Black Cat is designed in such a way to take advantage of her good looks, with the zipper on her catsuit pulled down enough to offer a generous view. She isn't ashamed that she's using her looks to do this and feels it's just using yet another thing in her continued survival as a burglar.

While Felicia Hardy is known as someone whom her friends can depend on, Black Cat tries to project her nature as a loner. Although truthfully she does enjoy her 'job' most when she is being forced to run from some hero who is attempting to stop her. It's part of the thrill, but it's also a little bit of human contact that she otherwise would not experience.

Both of these Felicias are real, and each acts as a mask for each other. The end result? Felicia's complex and has yet to find a way to resolve her different sides.

Felicia possesses a bad luck "aura"; she unconsciously affects probability fields in her surroundings. This causes improbable things to happen around her (someone slips on a banana peel; someone aims too high, misses her, etc) but not impossible (a pig flies to take a bullet) events. For people to be affected they must be in her line of sight.

Felicia has enhanced physical capabilities, with superhuman agility and balance, allowing her to navigate the rooftops of Manhattan much more easily. She also possesses enhanced strength, putting her on the level of an Olympian athlete. Finally, her senses are enhanced like a feline's, allowing her to hear, see, and smell with far greater precision than a human. Meow

Felicia has always been an athlete, right from a young age when she participated in gymnastics. As she got older, this evolved into gymnastic and cheerleading, and later still martial arts - specifically the Goju-Ryu school of Karate - when she enrolled at Empire State University. Growing older also saw Felicia develop into a beautiful young woman, which she has used to her advantage more than once (indeed, that's the whole purpose behind her costume being rather low cut). When she found out her father was a notorious cat burglar known as "The Cat" she decided to follow in the man's footsteps, teaching herself the tricks of a thief's trade, such as safecracking, lockpicking and other related skills. She has become particularly adept at disabling all but the most complex of security systems. Finally, she self-taught, mostly through trial and error, the all-important skill of moving swiftly but silently and using the shadows to her advantage, allowing her to come and go without being seen.

Felicia comes from a wealthy set of parents: her father's wealth came from the high profile burglaries he committed and her mother's wealth comes from inheritance, as her family was old money in New York. As such, Felicia herself has quite a tidy little savings account with money provided to her by her mother once she moved out. It was using this money that Felicia managed to procure things like that penthouse apartment in Manhattan that she currently resides in and the cute little sports car that she drives as Felicia Hardy. It is also this money that allowed her to buy the materials necessary to create her Black Cat costume. The costume contains two very specific (and useful!) pieces of equipment. The gloves are equipped with retractable claws that can serve both as offensive weapons in combat, but can also be used to cut through glass during a job. She also has miniature grappling hooks made from a high tensile alloy that she can shoot out to allow her to move across the rooftops more quickly. These too can be used in combat, to temporarily hold someone if she wishes.

Black Cat is overconfident, believing firmly that this is no situation she cannot cope with through the use of her skills, abilities and intelligence.

She has a secret identity as Felicia Hardy, which she has to keep a secret because... well, as a criminal she could be arrested. But her family and loved ones could also come under fire.

Three men in her life play major roles - her father spoiled her rotten and because of this if she wants something, she takes it and goes for it; Kingpin financially backed the experiment that empowered her and she worked for him briefly before violently escaping his clutches. He's a worrisome enemy who could want to bring her under his heel again; Spider-Man has pursued Cat for much of her criminal career. She has a soft spot for the webhead and loves the 'game' they play. Though she might not admit it, if he were to need help she might just hop in to help him, owing to her attraction to him and the thrill his chasing her gives her.

Committing crimes gives Felicia a thrill like an extreme sports enthusiast gets from bungee jumping. It's a rush, a natural high, and she is addicted. 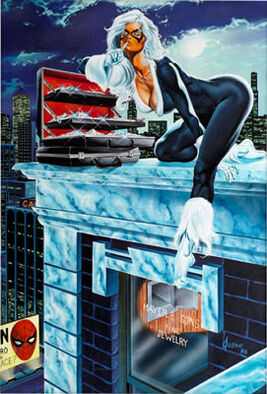 Hit Me With Your Best Shot by Pat Benatar

You Give Love A Bad Name by Bon Jovi

What You Make Me

Another Strange Me by Blind Guardian

I'm No Heroine by Ani Difranco

Spider-Man by The Ramones

Chase Me by Lolita Ritmanis

Retrieved from "https://uumux.fandom.com/wiki/Black_Cat?oldid=5862"
Community content is available under CC-BY-SA unless otherwise noted.