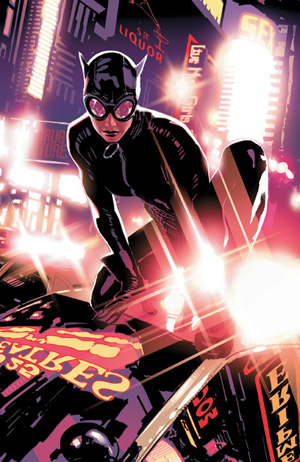 Selina Kyle is a socialite who resides in Gotham. With her primary focus being cat preservation, she uses her social status to help raise funds to save felines of all species from extinction. As her alter-ego, Catwoman, she is a cat burglar who has made a name for herself not only in Gotham but in underground circles throughout the world.

Cat Burglary - Selina is a master thief who specializes in 'cat burglary'. She's able to break in to almost any place as long as it isn't too heavily secured. Living up to the creature she has named herself after, she can slink her way in and out of just about anywhere and find ways to get to her objective. She has cost a lot of people a lot of money thanks to this skill.

Feline Empathy - Not an 'empath' in the conventional sense, she is still able to empathize with felines. Fairly adept, her affinity for cats gives her a sense as to if a cat is stressed, hurt or sick, or if it's in a defensive mood.

Stealth - Catwoman is able to move without being seen or heard. She's not one hundred percent silent and she's by no means invisible but she knows how to use shadows to her advantage and has all but perfected how to move with near-silent footfall.

Peak Human Conditioning - It should be obvious that she takes care of herself. She's no stranger to a gym and works very diligently on keeping herself lean, toned and healthy. It is because of this training that she can move with cat-like speed and agility.

Expert Combatant - Selina has learned several forms of hand-to-hand combat at the hands of not one but several expert trainers. This includes martial art forms such as Kung Fu and Karate as well as boxing and street fighting.

Seduction - There's no way you can look at her and say she isn't beautiful, a fact that she uses to her advantage as much as possible. Able to flirt and use her 'wicked wiles' with ease, she can lull a man into a (false?) sense of comfort and perhaps get them to do as she wish once she is able to get him wrapped around her little finger.

Personal Worth - While the majority of Selina's money is put towards the conservation of wild cats she has managed to acquire quite a nest egg for herself despite that. Most of the money she has kept for her own personal use comes from the jobs she gets hired for which usually pulls in a tidy sum. She is able to keep herself in a lifestyle that might be considered by many to be posh without difficulty and often indulges in the finer things life has to offer.

Catwoman Costume - The costume she wears serves several purposes. The most important is the concealment of her identity as it hides most of her more identifiable features. It is also padded, which helps protecting her from physical injury, and is flame retardant which, while won't protect her from exceptionally hot fires, does lend some form of shielding from burns. The tip of each finger bears a sharp claw which can be used as weapons as well as tools for climbing.

Whip - The whip is most certainly Catwoman's preferred weapon. Multi-functional, it can be used to trip up a person or bind them and can also be used to harm someone if she needs to protect herself. It is also used to swing from one place to another, like from one rooftop to an adjacent one.

Motorcycle - There are very few times when Catwoman doesn't take to the rooftops when she has to travel from one location to another but sometimes distance requires her to use another method of transportation. She owns a motorcycle for such times.

Egotist - Selina/Catwoman is fairly self-absorbed and it shows, especially when it comes to her conquests. Sure, she's good but there are times she loves to brag about it, especially if she manages to pull off a big heist or manage to wrap a man around her little finger. Isn't always the best thing as her ego has wound up getting her into some big trouble.

Batman - There's no way around it. Batman is her biggest flaw. He gets her to doubt her intentions and methods at times as well as thwart her plans and darnit all if she doesn't have growing respect and maybe even some form of feelings for the Caped Crusader. Makes breaking the law difficult sometimes.

Secret Identity - It is very important for Selina to keep her alter ego secret as it'd be dangerous if it were to be discovered She has made many enemies as Catwoman and things are dangerous enough as it is. It'd become doubly so if those who seek to hurt or kill her were to find out her real identity.

Criminal Record - You can be the best at what you do and still run into trouble. Such is the case with Catwoman. She has had some run-ins with the law and has acquired a bit of a file on her as a result. It is probably safe to assume that she'll get the book thrown at her if she were to be arrested again.

The first thing someone might notice about Selina in either of her identities is how cunning and shrewd she is. It manifests in business dealings, both mundane and criminal, and in her social life as well. It is also easy to see that she's slow to trust, that either a by-product of her childhood or of her chosen 'profession'. Quite the seductress, Selina can turn on the charm when it comes to inter-personal dealings with a member of the opposite gender, her manipulative nature used a lot when she wants to twist a man around her little finger. Especially if it means she'll get what she wants. Even then, despite what is easily seen there is just as much that is an enigma, the parts of her demeanor and psyche left for those determined and persistent enough to discover.

A night out at the opera for Selina and Bruce.

Someone is not a happy kitty.

A game of 'cat and bat'.
Add a photo to this gallery 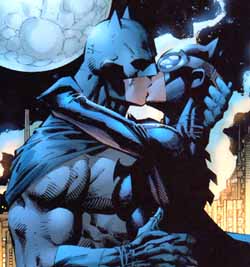 Retrieved from "https://uumux.fandom.com/wiki/Catwoman?oldid=5720"
Community content is available under CC-BY-SA unless otherwise noted.