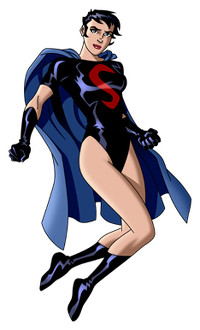 Cir-El is the daughter of Superman from another dimension where she was known as Supergirl, Daughter of Tomorrow.

What Mia knows - The girl named Cir-El was a daughter born to Superman, a child he'd have in the future and would come to be known after she helped him take on a villain. Lois accused her husband of having an affair as the girl looked so much like him. After a course of information given to him during a visit by the Futuresmiths, Superman took Cir-El to the STAR labs. After tests it'd be discovered that she was indeed her daughter but Lois was not her mother like it had been assumed. Regardless of this fact, Superman would come to love her like a daughter. They'd fight against Superman's adversaries together as father and daughter.

What's the truth - Cir-El was created by Brainiac as a part of his nefarious plan to eventually take out many of those Superman was close to. In a way, she was Brianiac's 'secret weapon'. In an attempt to thwart his plans, a devastated Cir-El threw herself into a time portal in an effort to keep from being born. Or at least that is what she had intended to do.

An Alternate World - Cir-El somehow became trapped in some kind of temporal rift that brought her to where she finds herself now. Not exactly an alien world to her but not exactly the home she grew up knowing, she now has to readjust and grow up all over again while trying to reforge a relationship that shouldn't even be.

Kryptonian Powers' - Thanks to the Kryptonian DNA she was given, Mia possesses such super powers as superhuman strength, hearing, speed and invulnerability. The only power she doesn't have is flight, instead being able to leap long distances. (OOC - will be expanded upon soon)

Red Sunbursts - Instead of vision based blasts she can emit beams from her palms. These are formed from red solar radiation, the same wavelength that renders her father weakened.

She has no real skills worthy of mention.

Sunlight - She is recharged by solar radiation. It makes being trapped in a dark area for too long a danger as it means she'll become weaker, necessitating that she keeps from being trapped in such places as much as possible.

Superman - Protective and willing to teach his daughter about the lore and ways of the Kryptonian, he is truly his daughter's most important person.

Kryptonite - As with the other Kryptonians, Mia is severely weakened by kryptonite and can even be killed if the exposure to it is long enough.

Not What She Thinks She Is - Mia thinks she's Superman's daughter which, while technically true, isn't exactly the truth. She's not the product of a marriage betweeen Superman and Lois like she's been led to believe but rather a result of Brainiac's genetic manipulation. Sad thing is that his lie makes her a liar in a twisted kind of way.

Braniac - Made as a tool for his evil scheme, he can easily be considered to be her 'public enemy #1'. Of course, there is a little matter of having to discover the truth, first.

Magic - While she's invulnerable to a lot of things magic is unforuntately not one of those things. Not exactly her Achilles' heel, it can still be used to knock her out just like most anyone else.

Retrieved from "https://uumux.fandom.com/wiki/Cir-El?oldid=5752"
Community content is available under CC-BY-SA unless otherwise noted.