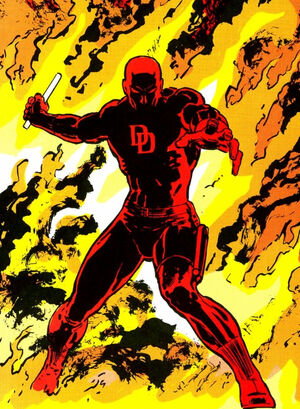 Matt Murdock is a blind lawyer by day, but at night, that handicap doesn't stop him from protecting the streets as Daredevil.

A long time ago, there was a boxer who had a son. The boxer wasn't very bright, and wanted a better life for his son than he could provide. He told his son never to fight, never to give in to anger, never to let people bully him into violence. He told his son to read books and to study hard, and become smart, because smart people were the people who could earn stability. The son was nonetheless instilled with strong values of right and wrong, which is why when he saw a truck about to run over an old man, he dove out into the street to push the man out of the way. A tank of something fell off of the truck and broke open, splashing into the boy's eyes.

And that is how Matt Murdock was blinded for the rest of his life.

As he grew older, Matt refused to let his handicap define him, especially because he came to realize that the radioactive material he'd absorbed into his body had enhanced his senses beyond human compare, and given him a sixth 'radar' sense besides. With the help of an old man named Stick, who had powers like his own, Matt learned to control his abilities. Eventually, he went to law school, supported by his father, who was summarily murdered by a crooked boxing promoter.

Enraged, Matt took the law into his own hands. He'd secretly trained to fight for most of his life, never letting his father find out. He went to confront the criminal responsible for his father's death. A number of prostitutes were present, and when one of them went to grab Matt, he reflexively swung her backward, inadvertently causing her to fall out of a window. This experience haunted Matt, and was the first taste of his troubled life to come.

Realizing that he needed to avenge his father properly if he was going to do it at all, Matt had a costume made for himself, to conceal his identity, and became the superhero Daredevil. His beat was Hell's Kitchen, the neighborhood where he grew up. His legal and heroic careers flourished.

For many years, Daredevil and one of his greatest foes engaged in a constant cat and mouse game, each one gaining an upper hand, only to later lose it. Matt has gone from living destitute and discredited, to controlling the crime of Hell's Kitchen. Throughout all of this, he has loved and lost several women, some to death, some to madness. Occasionally, he has been happy and content, but never for long.

More recently, Daredevil has spent a great deal of his time and sanity fighting to put a genie back into a bottle, when he was unmasked as Daredevil in the press. Though he was eventually able to trick the public into believing that he and Daredevil were two separate people, the toll on him was great, with many of his heroic allies believing he was starting to risk cracking under the pressure. These fears seem to have been borne out -- Daredevil has taken control of the ninja cult known as the Hand, ostensibly to reform it. But the power of the Hand is strong, and its core thoroughly rotten, so who knows if the Man Without Fear will be able to resist its seduction...

Daredevil's life and personality is defined by his constant struggle to always do the right thing, no matter how hard it is. The thing is, this is more difficult for him than it is for, say, Superman. To him, 'right' and 'wrong' are not always a black-and-white issue... as tends to be the case with someone whose adult life has immersed them in the intricacies of the law. While Matt has strong moral principles, often in following them he will end up doing things that seem wrong to others. He trusts his inner compass, but it often puts him on strange paths.

Matt is also self-reliant to a fault. The burdens that he carries are ones he straps to his own back, and then refuses to let anyone share. He alone is responsible for every tragedy of his life, and more keep adding up onto the list. He's too strong to be completely submerged in grief and self-pity... thus far.

While he's known to crack wise during happy times, Daredevil can also be a dour, humorless sort -- it depends on how things are going for him. When things are good, they're great. When they're not, they're horrible. And when they're really bad, sometimes Daredevil needs to be pulled back from the brink -- he has so much torment and rage that he keeps bottled up inside of his heart that sometimes it comes out in frightening bursts of violence and single-minded pursuit of justice (or possibly revenge).

In the end, Matt is a complicated man, and no one understands him but his woman, until Bullseye stabs her to death with a booger or something.

Daredevil possesses greatly enhanced senses, to an extremely superhuman degree. His senses of smell, hearing, taste, and touch are developed so strongly that he can use them to achieve spectacular feats, such as tracking a single person through a crowded, noisy city, or using someone's heartbeat as a makeshift lie detector, or identifying places a person has been by their individual odor. Along with his hearing, Daredevil's inner ear is also superhumanly strengthened, allowing him to pull off acrobatic tricks or balancing feats that would puzzle even Olympic athletes.

More amazing is Daredevil's radar sense: he has compared it to touching everything around him all at once. His radar sense allows him to, without sight, perceive a 360-degree radius around him solely in terms of physical space, similar to echolocation. Combined with his super-balance, it makes Daredevil near-impossible to trip up, and gives him an edge over those relying on sight to navigate terrain (especially city rooftops).

Daredevil is an accomplished fighter, having trained extensively in various martial arts, as well as the sweet science of boxing. His style emphasizes violent, sudden physicality combined with deft maneuvering. He's hard to hit, and when he gets you, he gets you good.

As a licensed lawyer in the state of New York, Matt Murdock is an experienced professional and possesses a nearly exhaustive knowledge of American law, with an emphasis on New York and its outlying region. He isn't infallible, but he's known as something of a miracle worker.

Because of his hands-on experience, Daredevil knows crime in his city like the back of his hand. If something goes down, he knows who he has to lean on to find out the who and why and how. Most criminals in New York being terrified him certainly helps with this.

Daredevil's primary weapons are a pair of specially-designed billy clubs that also contain grappling lines for swinging around and having a blast.

The Law Offices of Murdock and Nelson are a prestigious firm with a lot of standing in the legal community of NYC. Matt has neglected his role there of late, though, because he's swaddled in ninjas.

Daredevil has made friends with plenty heroes throughout the course of his career. Some of them have come to be trusted confidants. Some of them he's even slept with, because no one ever taught Matt Murdock not to mix business and angst. Most of them are pretty worried about his new friends, so it's not clear how much help he could milk out of them, but if he tried hard enough, who knows.

Right now, Daredevil has a posse, and that posse's name is the Hand. He has seized command of the ancient ninja cult, with an eye to use it to help clean New York's streets. The Hand, who have been mercenary assassins for as long as anyone can remember, are a bit locked in their ways on that front, and so his ability to rely on them is mostly dependent upon their unwavering loyalty toward their overlord. How long that will last is anyone's guess.

Daredevil has, in recent years, had something of a tenuous grasp on sanity. His heroic career is defined by constantly being pushed to the brink. Many men would collapse under the pressures he ends up facing time and again, and though he always seems to bounce back just before the point of no return, one day there may well be a day where he can't.

Daredevil's current association with the Hand has earned him questioning stares or scornful disbelief from his fellow heroes, and his heroic nature has earned him same from elements within the Hand. He's between a rock and a hard place right now, with no one he can truly rely on except himself.

Recently, Daredevil's secret ID was outed by a New York newspaper. While he has managed to disassociate the names 'Daredevil' and 'Matt Murdock' through various tricks and stunts, the memory of the scandal is still in the cultural memory, and it has its own heavily annotated Wikipedia page that is occasionally vandalized by the Owl.

Matt Murdock has the worst luck with women. It's not an issue of getting them -- he's had many lovers over the years. It just always ends horribly, often with the woman dying. Falling in love with Matt Murdock is the worst thing a young woman can do for their career and/or mental health. And yet, he's not a strong man in this regard, and his need for someone to love often overrides his better judgment, such as 'maybe I shouldn't date women if they always end up dead or Typhoid Mary.'

2010-08-17: World's Broodiest: Daredevil is visited by the always friendly Batman

Retrieved from "https://uumux.fandom.com/wiki/Daredevil?oldid=4424"
Community content is available under CC-BY-SA unless otherwise noted.