Neena was supposed to be the perfect weapon - She turned out to be a tank with lucky dice hanging from the barrel.

Neena was born to a government project, her mother one of the hosts to the program to awaken the dormant gene inside life forms fit to be filed as perfect weapons. Neena’s survival was still deemed a failure to the government eyes and though this was a project signed, sealed and delivered the maternal instincts of her mother remained and brought about the liberation from this project and the Neena left in the hands of a Chicago church priest.

Her childhood within the church of the Sacred Heart was none of trial, nor anything horrifying to tell, though she was always watched with a keen eye by Father Boschelli. He may have been a holy man but he was no fool to the rise in mutants, or the projects on people. Church and state were not as separate as they would wish them to be and some part of rumors and lies were always true. Her mother did well to leave why she was seeking sanctuary for the youth a secret but certain aspects of the growing child were hard to ignore.

On the streets of Chicago crime was ever on the rise, and an errand one night at the side of Father brought them head on with gang violence, the chrome wheeled vehicle rolled by slowly, and as another crowd passed in opposing direction to their side, oblivious. The tinted windows rolled down and the barrel of the weapon aimed for the others was not seen in the quick flash through broken street lights - but the sound was enough. Several explosions aimed for others, they were just the casualties in the way and Neena dropped the bag of groceries, her instincts and desire to survive carrying her into the Father’s side and pressing him into the pavement as well as safety while her body reacted to spring free of the small spray of bullets and stand with a narrowed glare at the disappearing tail lights.

It was a wonder she was not hit, it was a wonder Rudolpho Boschelli still lived to pick up the fallen groceries and find that his church was his own sanctuary as well. Was it all the lord, or was there more to the pale skinned teen?

Her attachment only went so far, and as to how deep it even ran came as a mystery to anyone around her as she was prone to her silence and thought – memories from her youth. She knew she had a gift or a mutation and it could be used for oh so much, though one night inspired the spiraling path that came after her departure.

Mercenary life was never the glitz and glamour that so many wanted to make it seem, but do not be mistaken, it was not all downhill either. This was often thought as the wad of bills was stuffed within the confines of her clothing and the weapon that got the job done was holstered. Though what she had become gifted her a precarious life, she was no longer known as Neena, that name was left on the curb shortly after her exit from the church steps – one that stuck was Domino.

The name has a history in itself; one Neena had kept long buried and only brought it to surface recently. After her mercenary job in Operation – Jericho she was assigned to guard Dr. Milo Thurman, which is where she got her last name as well as her main alias Domino.

During a raid by AIM forces, which were known for their desire for power and desire to overthrow the government, Milo was left thinking Domino was killed during the raid though she survived and was pushed into further cover.

Domino then went into operations with the Six Pack, and thusly meeting Cable during their missions as the Wild Pack where they worked for AIM, Hydra, and a man known as Tolliver. During this time is when the team name went to the Six Pack and dropped the Wild Pack name, meeting head on with Stryfe, which was Cable’s clone. The rest of the team, unknowing of the conflict was suddenly thrown into a personal battle between the two and their reputation was shattered with an explosion of Tolliver’s (Tyler’s) warehouse. Again still lead by personal ambitions against strife Cable lead the group to Stryfe’s citadel where he and his opponent teleported out during battle and left the rest of the group to die in the explosion. Domino left at this point and returned to her solo mercenary career.

Later, she was impersonated by Copycat who was helping Cable form the X-force, and once Cable found out the real Domino had been being held by Tolliver as a prisoner he went to her aid where she had discovered Tolliver’s plans to destroy the X-Force’s Adirondack base. During the escape lead by Cable this is where she met Deadpool, shooting him and falling to freedom, finally finding X-force and joined the team with her off and on lover Cable, left as their leader in times when Cable was off as well.

During the point where X-Force briefly disbanded she joined X-Corp in Hong Kong and uncovered the Third Species movement run by John Sublime and freed the captive mutants that were going to be used for body parts to make John’s U-Men.

During another solo period Domino found that Milo had been captured and went to his aid. Arriving too late but soon enough to find that her brother Lazarus was still alive, freeing him and taking him to the Sacred Heart church in Chicago as well, having to shoot her own mother to do so.

Employed by S.H.I.E.L.D as a member of the new Six Pack she was sent to attack Cable but fell back to his side after the Six Packs defeat joining him and Deadpool and following to Rumekistan where she battled her own internal conflicts (as well as Deadpools mouth) in assassinating the country’s leader Flag-Smasher, unknowingly putting Cable as the country’s leader. She left shortly after an attempt to kill Cable, trying to right the wrong as placing him as the country’s leader but did not succeed – whether it was due to her own love for him or to leave him the opportunity to prove her wrong is still even unknown to her. 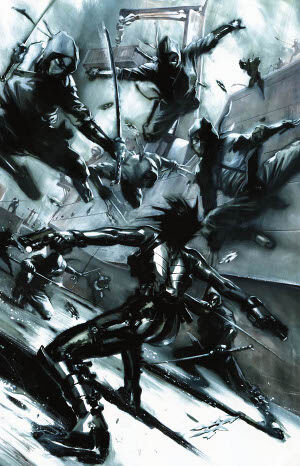 2010-08-24: You Filthy Scavengers: Nimrod Strange and his Third World Slayers hire a group of professional assassins consisting of Boomerang, Domino, Javelin and Taskmaster to hunt down and take out Arsenal, Batman and Moon Knight.

2010-08-24: Gunslinger Insurance: Outlaw and Domino meet up with Taskmaster to discuss a possible partnership, introductions are made and an instructive spar breaks out.

2010-08-27: Pool O' Vision Clowns: A meeting between Domino and Taskmaster is crashed by Deadpool and Harley Quinn.

Retrieved from "https://uumux.fandom.com/wiki/Domino?oldid=5618"
Community content is available under CC-BY-SA unless otherwise noted.