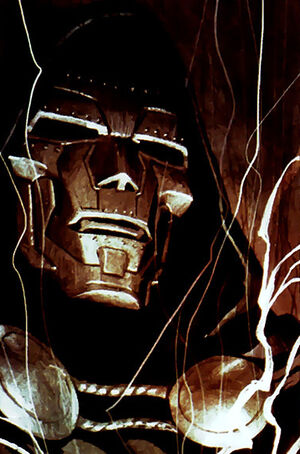 Doctor Doom, commonly known by his birth name, Victor von Doom, or simply as Doom, is the armored monarch of the European nation of Latveria, and one of the most terrifying geniuses in the world.

In the remote European nation of Latveria, there was a witch who sold her soul to Mephisto, but one of many Satans. She died and was swallowed up by Hell forever. The witch's husband was killed unjustly by Latveria's government. Left alone, their son, Victor, became an intelligent, prideful, and ultimately hateful man. He swore vengeance, and to do this insisted on becoming the best he could possibly be, better than any other man.

Scouted by Empire State University, Victor von Doom traveled to America, where his university years were spent in solemn scientific experimentation, with little socializing amongst his peers, for he considered himself their better. Doom's project was to build a machine capable of communicating with the dead. Ignoring his colleague Reed Richards' protests that his calculations were flawed, Victor activated the machine, which exploded in his face. Disgraced, he fled America and traveled to Tibet.

Victor von Doom went into seclusion at a little-known monastery, mastering the occult disciplines of the monks there before then mastering the monks themselves. He forced them to build him a suit of armor to his exacting specifications -- and when the mask went on, Victor became no more. All that remained -- was Doom.

Returning to Latveria, Doom slew the nation's ruler and tamed its army, installing himself as the new despot, and letting his delusions of grandeur grow ever more powerful. The resources provided by his position enabled his technological, scientific, and mystical development to outstrip nearly anyone on Earth -- except for Richards. Which is why, to this day, Doom has been biding his time. Waiting. Soon, Richards. Soon, Doom will have his revenge.

To Victor von Doom, the world is little more than his birthright to be claimed. This says it all, really -- about Doom's profound arrogance, even more profound sense of entitlement, and truly astonishing hubris. There are men who seek to conquer the world for reasons. They want to make a change, perhaps, like Magneto. They want to force themselves into becoming someone humanity cannot live without, like Luthor. But Doom has no purpose in his desire, beyond desire itself. Doom wants to conquer the world for no reason other than that he feels the world belongs to him.

That, of course, betrays the terrible truth of Doom: that he is, at his core, a shallow, petty, ultimately very /small/ man. He has, to date, used his extravagant brilliance to conquer a nation (to no great benefit to anyone but himself) and launch a number of failed attempts to hurt people, most particularly Richards and his family. Doom would sooner spend his days considering revenge over some historic slight than consider using his genius to fix the world. His obsessions limit him, and for all of his self-assurance and iron will, he doesn't possess the backbone required to grow as a person.

Of course, Doom does not see things this way. To him, all is inconsequential -- when compared... to Doom. His universe begins and ends with him, and anything else only earns notice because of its connection to him. He is utterly humorless in his abject egotism, and takes it more seriously than Superman does apple pie. This, more than anything else, is what makes him dangerous. There is nothing to hold him back but his own occasional pragmatism. After all, what are morality and ethics to a man who has trascended all need for them... a man such as Doom?

This is not a superpower in the traditional sense, but Victor von Doom is one of the smartest human beings alive. His understanding of nearly all extant fields of science, on both theoretical and pratical levels, is second to none (or, more accurately, to RICHARDS).

Doom's magical skills are less often explored, but he is capable of various terrible things using his mystic might. He can project bolts of magic energy, establish protective shields, open gateways to Hell, and summon demonic hordes under his control. He also possesses a scrying pool which he has mastered the use of.

Finally, Doom's willpower is absolute. He is strong-willed to the point of being able to successfully resist mind control through sheer stubbornness alone.

Victor von Doom is good at science. No. No, scratch that. Doom is GREAT at science. Gather Luthor, Pym, Stark, Terrific, Osborn, MODOK, Octavius, and Starro into a room and ask them to regale the crowd with their latest scientific innovations, and Doom will breeze in and announce that not only did he think of all of those things a week prior, but he also invented a six-pointed Starro in his spare time besides. His mastery of science extends from robotics to weaponry to biochemistry to time travel. Doom could cure cancer if he wanted to. Sadly, it has not occurred to him.

In addition to his scientific prowess, Doom is also a dangerously skilled sorceror. His magical might is so fearsome as to put him on the shortlist of those who might one day take over for Doctor Stephen Strange as Earth's Sorceror Supreme. He could hold his own against Zatanna in a spell-off, and he could do it talking forwards, like a normal person.

Doom is the experienced and self-assured tyrant of his small home nation, Latveria, and has maintained a terrifying, iron-fisted rule for some time now. In this time, he has transformed Latveria into an isolationist utopia, where there is no crime and the peons have plenty of bread. It is not the technofuturist wonderland that Wakanda is, but that is because Doom is greedy and keeps all of his inventions for himself.

Doom's armor is his signature achievement. It boosts his strength and durability to superhuman levels, protecting him from all manner of threats -- insulating him from everything from extreme temperatures to psychic invasion. He can survive extended stays in hostile environments, such as undersea or outer space, and supplements this imperviousness with a personal force field. The armor is constructed from a Promethium alloy of Doom's own design, rendering it highly resistant to mystical attacks. Its HUD offers a wide array of scanning implements, allowing him to detect just about anything that can be detected. Doom's armor's weaponry is highly modular and can be configured to suit various needs, but its primary means of attack are energy blasts fired from his gauntlets, comparable to Iron Man's repulsor rays. Finally, his armor can fly.

Doom owns the nation of Latveria, and all of its fantastic resources, most of which he hoards to himself. Castle Doom is a nigh-impenetrable technological marvel; it's a genuine shame no one will ever see most of it except him.

Doom often conducts business through his Doombots -- robot replicas of himself even more advanced than SHIELD Life Model Decoys. Only the most sensitive instruments or persons can tell the difference, but whenever Doom is outside Latveria, it's often safe to assume that he is there by proxy, remote-controlling a Doombot. Each Doombot wears armor just as powerful as his own, minus the Promethium.

Doom also has access to a ridiculous amount of technology, including just about anything and everything a given plot arc requires.

Doom's arrogance knows even fewer bounds than his brilliance. So self-consumed is he, so egotistical and so hopelessly selfish, that the needs of others literally and truly never occur to him. His nation exists as an extension of himself, not as a population of human beings. His work is not to be shared with the world any more pieces of his physical brain. Doom could revolutionize the planet to the point of unrecognizability within a decade. But he does not, because for all of his big ideas, being pinned under the weight of his ego has made him a small, petty man.

In relentlessly pursuing his own agenda, Doom has made powerful enemies. Most heroes of the free world despise him, and those who do not despise him fear him. Even other villains are loath to associate with Doom, who has a history of treachery beyond compare, and who will exploit his allies until they are done being of use to him -- and then cut them loose. No one trusts Doom. Unfortunately, sometimes, there's no one else to turn to.

Doom's gluttony for power often leads him to make choices that explode in his armored face. His hubris, like his genius, is beyond compare. Doom sees himself as so far beyond mortal limitations that when he slams into them, he hits them hard -- Doom is the type to dare challenge Galactus, and expect to win.

Finally: Richards. Richards, and his accursed family. Doom hates Richards. Doom will do whatever is in his power to destroy him and his little 'team' -- revenge is, after all, the right of Doom. RICHARDS--!

Retrieved from "https://uumux.fandom.com/wiki/Doom?oldid=5776"
Community content is available under CC-BY-SA unless otherwise noted.