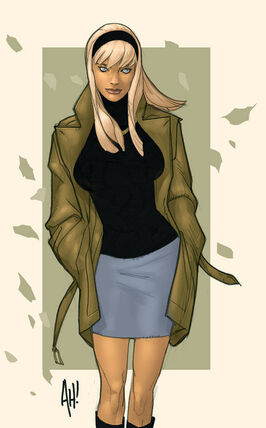 Gwen Stacy is a well-balanced, smart young woman. She is somewhat self conscious, at times, and can feel snubbed easily. However, she is not one to hold a grudge; she forgives and forgets as quickly and easily as she may feel slighted.

Science!: Gwen is a science major with a dedgree from Empire State University.

Modeling: A policeman's salary doesn't pay for college on its own; Gwen helped pay for her tuition with modeling gigs.

Screaming for Spider-Man: She gets in trouble a lot; this comes in handy.

Smarts: Forget the blonde jokes. Gwen's no bubble-headed blonde. She's got a brain in that pretty head of hers, and she knows how to use it. She does SCIENCE! for cryin' out loud.

Spider-Friend: Being a friend of Spidey -- even though she's not always been his biggest fan -- has come in handy on those times that she's been snatched by a bad guy.

Gets Kidnapped A Lot: It happens. You hang out with Spider-Man, maybe have a picture or two published in the Bugle and then WHAM! Every Spider-Villain is kidnapping you, hanging you off of tall buildings and bridges. That's basically Gwen's life.

Gephyrophobia: A fear of bridges.

2010-08-25: Screaming Familiarity: Spider-Man takes on the Vulture, but gets a blast from the past during it.

Retrieved from "https://uumux.fandom.com/wiki/Gwen_Stacy?oldid=5602"
Community content is available under CC-BY-SA unless otherwise noted.