Hercules is the son of the god Zeus and the mortal Alcmena. For thousands of years he's been the God of Strength, an adventurer, and a professional carouser. 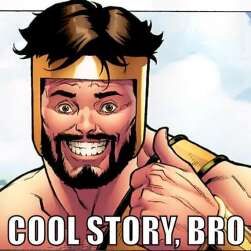 Hercules is loud, impulsive, and often crude. Some heroes take their work very seriously. Hercules, however, almost seems like he's in it for the thrill of the competition; sometimes he'll even go looking for fights if there isn't enough traditional superhero'ing to go around. He's a nigh-infamous womanizer, with romantic conquests up and down the multiverse (some while supposedly married to or dating another). And yet, for all of that, he's still unquestionably a hero; he'll always be there for someone in need, even if it would put his life in danger. Even if there's no glory to be had. Flaws he may have, but if needed Hercules will go to the ends of the earth to put things right (see: the Twelve Labors).

Super Strength: Hercules can lift well over 100 tons without breaking a sweat, and with effort he's thrown Godzilla and towed the island of Manhattan.

Super Speed: Hercules' powerful leg muscles allow him to run faster than a normal human athlete and leap up to 100 feet straight into the air.

Super Agility: Hercules' reflexes and agility are superhuman, making him an athlete with few peers (as befits a god whose purview included gymnasiums).

Super Stamina: Hercules' physical stamina is almost limitless; he simply doesn't get tired from exerting his strength, unless he's doing something really dramatic. He's also immune to mortal diseases and can even survive unprotected in outer space (for a little bit); he can be drugged or poisoned, but it requires a VERY high dose.

Durability: Hercules is very tough. He regularly gets in fights with people just as strong as he is (and takes a ferocious beating before going down), and bullets tend to just annoy him.

Regeneration: Even when Hercules is injured, he bounces back remarkably fast. Not anywhere near as fast as Wolverine, however. He can't regrow missing limbs or organs either.

Brawling: Hercules is a supremely gifted brawler, to the extent that he even invented his own style called Pankration that blends wrestling and boxing. Even Thor has to admit that Hercules is more skillful than him in this particular area.

Weaponry: As expected, Hercules is also very skilled with all the weapons of ancient Greece, ranging from swords and spears to bows. He was once known as an amazing archer, though due to his first wife's death he rarely uses the bow these days.

Mythology: Thanks to his origins in mythic Greece and his travels across the world, Hercules has become something of a de facto expert on mythology. Mostly because he's lived it.

Performance: Hercules was classically educated, and he knows his way around several ancient instruments.

Charisma: Hercules' animal magnetism is almost as legendary as his strength. He has a girl in every port, and even quite a few non-ports, and fans across the world.

Handsome: Part of his charisma, of course, comes from his rugged good looks. Or possibly the beard.

Gods of Olympus: As the son of Zeus and (usually) the god of strength, Hercules is part of the Olympic Pantheon. On paper, this means they should all be allies. And quite a few of the gods do help Hercules out, but he also has quite a few enemies. The fact that he's good friends with his half-sister Athena and uncle Poseidon should count for something though.

Wealth: Somehow, Hercules has blundered into amazing wealth. This mostly comes from investing in things and then having the interest build up once he's forgotten about them. He owns several breweries and a significant share in Stark Industries, among other things. Part of this is tied up in various charities (including a hospital for monster-children), however.

Nemean Lion Skin: One of Hercules' first labors required the slaying of the Nemean Lion. Hercules wears its invulnerable (or near-invulnerable) hide to this day. He wears much less of it these days, however, mostly a pair of bracers and a sash across his torso.

Adamantine Mace: Hercules' mace isn't quite as cool as Thor's Mjolnir. It really only hits things. It is, however, nigh-indestructible. Meaning it doesn't break when he hits things REALLY hard. Hercules often leaves it in storage, however.

Impulsive: Hercules is well-known for being a hothead. He has a volatile temper, and he doesn't often think before he acts. This has gotten him into a lot of trouble in the past and will continue to cause trouble in the future.

Womanizer: It's very, very easy to distract Hercules from what he's doing if you show a little thigh.

Rivalries: Hercules has many enemies in his own pantheon, including his half-brother Ares and uncle Hades, but most importantly his stepmother Hera. Hera despises him as a reminder of Zeus' infidelity.

Evil Twin: As part of a sinister plot, Ares and Hephaestus conspired to make a duplicate of Hercules to ruin the Prince of Power's reputation. Among other things, this duplicate attacked and raped Hippolyta of the Amazons. It continues to trouble him to this day.

Godly Vulnerabilities: There are things in this world that even the gods fear. Even Hercules' incredible might can't protect him from things such as the Hydra's blood. Also, he's strictly subordinate to his father Zeus (because he's king of the Olympians). If Zeus wanted, he could slay Hercules utterly. He could also strip Hercules' power from him.

That's My Boy: He may not act like it sometimes, or even most of the time, but Hercules desperately wants his father's approval. Every feat of heroism he performs is, in some way, meant to bring glory to Zeus. Hercules will often push himself beyond his limits for this reason. It's unfortunate for Hercules that Zeus is a very distant figure.

Logs Including Your Character[edit | edit source]

A list of logs that your character appears in should appear here.

Retrieved from "https://uumux.fandom.com/wiki/Hercules?oldid=5610"
Community content is available under CC-BY-SA unless otherwise noted.