The Martian Manhunter, known as J'onn J'onzz to his friends, is an extraterrestrial immigrant to Earth and the last survivor of the ancient civilization of Mars. Both a philosopher and a guardian, he uses his skills to defend his adopted planet from all threats, equally at home operating in the shadows as the spotlight.

"J'onn J'onzz ("Light to the Light" in Martian) was born on the planet Mars (known then as Ma'lecaandra) thousands of years ago. His people, the Green Martians, were one of the oldest races in the universe, rivaled only by the warlike White Martians who shared their planet, and allies of both the Guardians of the Universe and the race that would become known as the New Gods.


J'onn's life on Mars was shaped by Martian principles. Like all in his society, he fulfilled dual roles. In one, he was a philosopher and family man, deeply devoted to his wife M'yri'ah and his daughter Kh'ym. In the other, he was a member of the Manhunters of Mars, his people's police force. He lived by the code of "Once begun, to walk the path, to pursue the prey, to never turn aside, short of death, until justice is done."


The destruction of Martian culture is attributed directly to J'onn's brother, Ma'alefa'ak ("Darkness in the Heart"), who was born a mutant and unable to access the innate telepathic abilities of all Martians. Over the years, Ma'alefa'ak became bitter and destructive, despising Martian society. At last, he attempted complete genocide of the Green Martian race through a telepathically contagious virus, H'ronmeer's Curse. This virus destroyed the entire Martian civilization, killing thousands of Green Martians whenever they used their telepathic abilities. J'onn's wife and child were among the death toll, and J'onn broke down.


Alone and grieving, J'onn wandered the face of his ruined planet for centuries, kept alive by his now-unique Martian physiology. It wasn't until an Earth scientist named Erdel made a spectacular breathrough that J'onn was able to move past his grief. He found himself accidentally teleported through space and time to Earth, long after his civilization was forgotten.


As a peace officer and philosopher, J'onn made the decision to help defend his new home from evil, hoping to never witness the death of another civilization. His natural Martian abilities were considered superpowers on Earth, placing him far above the average earthling, and J'onn felt compelled to use that power to protect and serve.


Using his powers, J'onn established various identities around the world in order to learn more about his new people. Decades later, the debut and widespread acceptance of heroes like Superman led J'onn to believe that Earth was ready to know about their other alien visitor and he went public as the Martian Manhunter.

J’onn J’onzz is at heart a peaceful man. Despite a life filled with tragedy and conflict, he longs for a home where he can simply rest and enjoy life. However, this is balanced with a strong sense of duty and an immaculate moral compass that drives him to defend the innocent, pursue justice, and live up to the ideals he holds dear. As the last survivor of a great culture who witnessed its fall, he is very attached to the institutions and cultures of his new home.

On Earth, J'onn is an eternal outsider, and can be strangely objective in even the most unusual or emotional situations. He is not human, was not raised as a human, and although he often walks in human form, does not wish to be human. As much as he loves humanity, he is and will always be the Last Son of Mars.

Although Mars always holds a special place in his heart, J’onn has truly come to love the Earth and its peoples, and remains one of its staunchest defenders. He approaches life with a calm detachment that masks his care and empathy, and uses rational analysis and logic in the course of his duties. As one of the most powerful beings on the Earth, he holds himself to rigid standards concerning the use of his power, though his standards are not precisely those of Earth.

The Martian Manhunter possess a wide array of varied superhuman powers, which stem from his alien physiology. He has been referred to as the “Swiss Army Knife of Superheroes.” Most, if not all, of his powers are common to all members of the functionally-extinct Green Martian race, although J'onn has been mentioned as one of the most powerful even among his own people.

J'onn is not quite on par with the Batman when it comes to prowess as a detective, but he scores quite favorably compared to the average PD investigator. He has intentionally honed his detective skills, and maintains his level of mastery through constant use of his talent. He is extremely intelligent, with advanced reasoning and logic capabilities that he can apply to the situation. He is also able to utilize his various superpowers in the course of detective work, giving him much greater resources than any human detective.

Despite J'onn's eternal 'outsider' status, he has worked hard to overcome the natural emotional gulf between him and humanity at large. Due to this diligence, he is noted as an excellent mediator and diplomat, with good human relations skills when he applies himself. He is helped in this by his natural telepathic powers and attunement to emotions, granting him exceptional empathic abilities.

Due to J'onn's telepathic abilities, he is multi-lingual and fluent in virtually every Earth language. J'onn is a true international hero, and spends a good portion of his superhero career outside America. In the Southern Hemisphere, he is more well-known than Superman, due to this. He has only to be exposed to someone fluent in a language and he can copy that fluency.

J'onn is in possession of a Kuru pendant, which acts as a repository of all Martian culture and lore. Using telepathy, a Martian can use the pendant to access the store of knowledge. This includes Martian cultural practices, history, and technological achievements.

As part of his Manhunter training on Mars, J'onn was telepathically imbued with the memories of the greatest Manhunters from Martian history. J'onn's memories thus effectively stretch back much further than his actual lifespan, although most of these concern Martian history that is no longer relevant on an interplanetary scale.

J'onn has many contacts and unwitting allies throughout the world. Due to the benefits of his shapeshifting and telepathic prowess, and out of a desire to grow closer to humanity, sometimes J'onn takes on a mortal identity. These personas have been of various ethnicities, genders, and nationalities, but they have allowed J'onn to amass a vast number of contacts in various fields related to law enforcement and charity work, though most of them have no idea of J'onn's true identity.

Unlike many superheroes, J’onn was not born on earth and his superhero persona is his true identity. However, in order to more fully understand his adopted people, he takes on various identities around the world and walks among humans in secret. He has, at one time or another, been of all races and genders, across all inhabited continents. While some are of J’onn’s creation, usually conceived for a specific purpose, the others are all people who died before their time, whose lives J’onn slips into and lives out part-time to honor their memory. These are a few of his more useful:

J'onn is extremely fond of Choco (and Oreo) cookies, to the point of addiction. It is unknown if this is a physical or psychological addiction, but J'onn sometimes experiences withdrawal symptoms such as shortness of temper or mental regression. Or he may just be messing with people's heads. Nonetheless, he almost always has a bag or two on hand.

J'onn is a perpetual outsider, the last survivor of Mars and powerful beyond belief compared to a normal human. As such, he sometimes has trouble relating to the normal people that make up the vast bulk of the population of his adopted homeworld. In addition, his inhuman form (itself a compromise between a human shape and his more inhuman native form) can sometimes instill fear in people despite his attempts to remain comforting.

As a Green Martian, J'onn suffers from an intense pyrophobia. Although he has been on earth long enough to control this racially instinctive fear around small or controlled fires, he still becomes extremely distressed and panicked while in the presence of large, uncontrolled, or hostile blazes. In addition to the mental mesmerism and pyrophobia inspired by open flame, he suffers a heightened physiological reaction to fire. His nigh-invulnerable form is easily burned by fire (not mere heat, but actual flame), and his other abilities become extremely hard to use. In extreme cases, such as being bathed in continuous, high-intensity blaze, the Martian Manhunter has been known to lose cohesion over his form entirely and melt in a sentient, terrified puddle. This is tied directly to a Martian’s telepathic abilities, and he loses this weakness if he loses or is shut off from his telepathic abilities, then he also loses the weakness to fire. J’onn has been known, on occasion, to shut down his own telepathic abilities to lessen his vulnerability to fire, and he has been on Earth long enough to attain enough control that he can handle the presence of small, controlled fires with little issue.

'Enemies: J’onn has fewer living enemies than other superheroes, and is almost entirely without a personal rogue’s gallery. Most of his enemies are actually the League’s enemies, but he does have a few very specific grudges.

J’onn’s grudge against the ruler of Apokolips goes back a very long way, to the height of Martian civilization and J’onn’s career as a Manhunter. Both parties have a long-standing hatred of the other.

Another New God in Darkseid’s employ as an assassin, this traitorous cur was once J’onn’s friend, until the betrayal of the Martians. J’onn knows he is a treacherous and untrustworthy villain, which makes him fairly reliable as an unwitting ally when J’onn turns the tables on him.

A joke among the supervillain community, the Human Flame is basically a guy in a flamethrower suit. However, he was humiliated and caught by the Martian Manhunter early in his career and has sworn revenge. 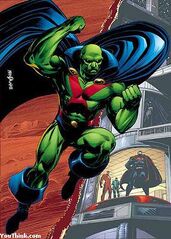 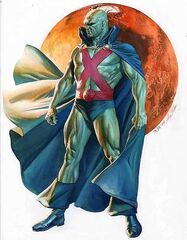 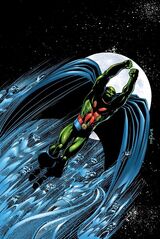 Add a photo to this gallery

Retrieved from "https://uumux.fandom.com/wiki/Martian_Manhunter?oldid=5824"
Community content is available under CC-BY-SA unless otherwise noted.