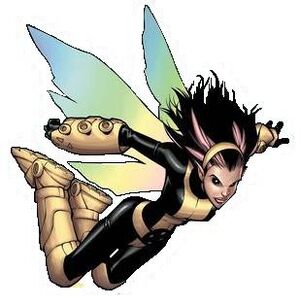 Megan Gwynn, AKA Pixie or Dark Pixie, is a current member of the X-Men.

Pixie Dust - The dust that Pixie can produce is a mild hallucinogenic. If one were to inhale it they'd begin to see things that are not there much like if they were to have taken a hit of LSD or something similar. The effects only last for a few minutes so doesn't usually act as anything but a distraction.

Flight - Pixie can fly thanks to the large, fairy-like wings that jut from her back while they are manifested. She's able to use her flight while lifting other people or objects as long as they're not too heavy. Trying to do so if the person(s) or object(s) is/are heavy or flying for a long period of time tires her out rapidly.

Magical Teleportation - Pixie was taught a spell which allows the teleportation of herself as well as others. There are limits of course, depending on the number of people she tries to teleport at one time although the effects of doing so are currently unknown.

Student - Pixie has all the skills of someone who has currently graduated from high school. This includes basics like computer use for research and such subjects as math, science, languages, etc.

X-Men Training - Her time as a member of the X-Men has given her such skills as combat preparedness, the ability to work as a member of the team and tactics. She's still learning but has already become somewhat knowledgeable in these areas.

X-Men - Not only are the X-Men those she works with as a team but they're also her friends and people she can turn to when she needs help.

Xavier's Institute - The school has been her home since her arrival as a young teen. A place where she can have a roof over her head and other necessities taken care of as well as a place of learning, it has become the most singularly important establishment in her young life.

Young - Although she's at an age where she's technically an adult she is still very young in many ways. A bit naïve at times and silly, and let's not forget periodically immature, she can act like a girl who is several years younger when she gets into the mood.

Missing Piece Of Soul - Pixie hasn't really been the same since she lost the piece of her soul which makes controlling impulses difficult. This can be something like being able to keep her mouth under control when it comes to saying something she shouldn't or being unable to keep herself flying off half-cocked and getting herself and others into trouble.

Obvious Mutant - The color of her hair and eyes can be chalked up to dye and contacts but there's no way she can pass off her wings as being anything but a mutation when they're manifested. That means any mutant hunters, haters or anyone else who might want to cause harm to people like her have a big glaring neon-sign of a clue when she's out flying around.

Pixie is still a very young girl at heart despite the fact that she is legally considered an 'adult' now. She is still a bit naive and prone to bouts of girlish behavior which includes crushes on boys, temper tantrums and gullibility. Don't forget the bouts of immaturity she can be prone to as well. This is all added to by the fact that she is apt to go off half-cocked; partially a byproduct of her age as well as she still has a part of her soul missing, Pixie has problems controlling herself. Whether it is in the form of running off at the mouth or doing things without thinking them through, she can be something of a handful when she gets into the mood. Despite this, she has also proven to be loyal and devoted, a trust-worthy friend and teammate even if she has problems behaving properly.

Retrieved from "https://uumux.fandom.com/wiki/Pixie?oldid=4303"
Community content is available under CC-BY-SA unless otherwise noted.