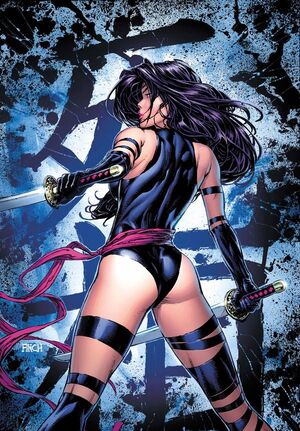 Elisabeth "Betsy" Braddock, also known as Psylocke, is a former fashion model, spy, Mojoworld television personality, ninja assassin, and white person, and is currently a member of the X-Men.

In the far-flung past of 'nearly thirty years ago,' twin children were born to the Braddocks, a wealthy English family. These twins were named Brian and Elisabeth, and Elisabeth was shortened to 'Betsy' in due time. As the twins grew older, they became exceptional individuals in their chosen fields.

Betsy, however, did not choose one aspect of herself, which was being a mutant. Her psychic powers and glamorous looks helped bestow upon her a life of both luxury and danger, juggling careers as a fashion model and a psychic operative for British intelligence org STRIKE. This career ended when a villain, Slaymaster, beat her half to death and ripped out her eyes.

Later, Betsy was kidnapped by an extradimensional fatass named Mojo. Mojo, who loved TV so much that he presided over an entire dimension in its cathode thrall, gave Betsy robot eyes and made her the star of one of his TV shows. This coincided with a spat between Mojo and the X-Men, and they ended up taking her home, and then taking her in, because she didn't have anywhere else to go and she was, on the whole, pretty useful. And so, Betsy Braddock became Psylocke.

After some time fighting alongside the X-Men, Betsy was put through the Siege Perilous during a mission in Australia. The Siege Perilous wiped out her memory, and whisked her away to elsewhere -- Japan, where she was found by the Hand, a wacko cult of ninjas. One of them, seeking to save the life of his prized assassin, hit upon the idea of using Betsy's body to finance an arcane mystical Hand technique known as 'switching two peoples' bodies.' And so, Betsy Braddock became Japanese.

In short order, Psylocke betrayed the Hand, and returned to America and the X-Men, where they all eventually got used to her newfound minority status. Later, in another unfortunate set of circumstances, she was nearly killed by one of the X-Men's foes, and to save her, she was exposed to some deus ex machina from the dimension of the Crimson Dawn. This had some aftereffects, of course, but they went away with time.

Now, Psylocke continues to serve with the X-Men, although she doesn't teach the kids, because children are brats and should learn by doing. From a woman who has had her body messed around as much as Psylocke has, this is not great advice, but she stands by it.

Psylocke is defined by several overpowering personality traits, some of which are at direct odds with one another. What bridges all of it is her confidence. Betsy Braddock takes great pride in her ability to depend upon herself for just about anything, and never finds a situation too grim for hope. She's of the disposition to believe that anything can be overcome with sufficient know-how, and her wide variety of skills and resources only bolster this belief in herself. If Psylocke can't kick her way through a problem, she can psychic-powers her way through it, or throw money at it, or lean on her spy buddies at it, or lean on her X-Buddies at it, or... you get the idea. Nothing is ever impossible, and Psylocke has very little time for anyone who disagrees.

Psylocke is a very calm, determined individual when she wants something. She's not the type to explode into histrionics, or ever really let anyone get a good bead on how she's feeling -- stiff upper lip and all that. She can be stubborn, but only when she knows she's right, and frankly, she knows she's right 100 of the time. All the same, she's not the type to be goaded into a fight, what with cooler heads prevailing and all. Most attempts to bait her will fail.

This side of her extends to Psylocke's working habits. When 'on the job,' the X-Woman tends to be of the no-nonsense sort, aside from a stray quip where she deems one to be appropriate. She's not interested in horsing around or doing things inefficiently. Sometimes, this makes her seem like a dour wet blanket. Well -- she is. And if people don't like it, that's their problem, according to her.

Off the clock, though, Betsy Braddock can be a very charming, fun person. She enjoys a very high quality of living, and anyone able to match it would have no trouble seeing the vibrant, dryly humorous side of her personality. Unfortunately, because of her exacting tastes, most of her friends tend to be the fellow rich, or other longtime X-Men who've spent years getting to know her. To those capable of making it over that wall, she's a loyal friend and a surprisingly gentle soul, despite her tendency toward know-it-all-ism.

Psylocke has a wide variety of psychic abilities, centered around the twin pillars of telepathy and telekinesis. Over the years, the balance of these powers has fluctuated -- right now, telepathy is dominant over telekinesis, but in the future, this may change.

If we were to assign all of the telepaths in the universe letter grades, and assuming that the likes of Charles Xavier and Emma Frost were at 'A+,' Psylocke is a solid 'B.' She is capable of reading minds (performing feats of psychic lockpickery in the process), implanting psychic suggestions (or outright mind control, if the person is not sufficiently shielded), and generating particularly nasty psychic feedback that harms the victim on a mental level. Because of Psylocke's training and general demeanor, this offensive focus is her specialty, and her discipline with it is such that she can form what she refers to as her 'psychic knife' -- essentially, a small cone of psychic energy fixed to one hand, that she can 'stab' opponents with. Contact with a psychic knife is much the same as contact with a real knife, except you're getting stabbed in the ability to think straight. Powerful psychics often have defenses against such an assault, however, and telepathic shielding often serves to weaken, if not outright deflect it.

Psylocke's telekinesis is less powerful, but no less effective. Like her telepathy, she has mostly learned how to use it in an offensive capability. She can move moderately sized objects, and add telekinetic force to her blows, causing her to hit harder (and she already hits pretty hard). She is capable of creating brief force fields, capable of deflecting most weapons fire, energy projections, and so forth. In hand to hand combat, she is also capable of using her TK to shove and trip opponents, because she cheats. With sufficient focus, Psylocke can manifest a 'psychic katana,' which is a sword made of purely telekinetic force. It has the same properties as her psychic knife, but does physical damage as well as mental. She doesn't use it much, though, because it does take a lot of effort to keep up, and it's fairly gaudy anyway.

Psylocke is a master martial artist who has trained in arcane, widely unknown styles utilized by both the Hand cult and the Crimson Dawn. In addition, she has received much training from her time as an X-Man, and isn't shy about using her telepathic and telekinetic powers to play dirty -- meaning that she's often able to fight outside her weight class in a one-on-one scenario, and that she can usually handily dispatch mobs of typical goons (or even Hand ninjas) on her own. She is also an Olympic-caliber acrobat.

From her time with the Hand, Psylocke also received training in the ancient art of assassination. While she is loathe to ever kill again (so far), many of her skills still come into play, including stealth, breaking and entering, and so on. While those with super-senses would be able to spot her, she can render herself all but invisible to the common person, even without psychic suggestion, and is capable of defying most non-Baxter-Building security systems.

Prior to her time living in a Japanese person's swimsuit, Elisabeth Braddock was a member of the Psi Division of British intelligence agency STRIKE. From this time, she's familiar with the ins and outs of the global intelligence community, and should the need arise, she can James Bond with the best of them.

Less importantly, Betsy Braddock has lived a very charmed life as a member of society's elite, and as such is very well versed in the demands, expectations, and privileges of the elite.

Psylocke is fabulously wealthy, and has very smart people keeping tabs on her money so that she doesn't have to worry about it. She's not on par with a Bruce Wayne or a Charles Xavier, but she's got enough to live more than comfortably, basically forever.

As a member of the X-Men, Psylocke has all of the delightful perks that come with it, from room and board at the Mansion, to access to the Danger Room and Cerebra, to use of all the communal cars and motorcycles in the garage, to Shi'ar magical clothing generators and whatever else they keep in the basement. It's boss as hell.

As a former member of Britain's intelligence community, Psylocke retains many relationships from her past line of work, and as is de rigeur for such things, she has various favors that she can cash in where narratively necessary.

Betsy Braddock has a twin brother, Brian, who is the owner of their ancestral family home, Braddock Mansion. The two keep in touch, although not in any great depth, but should push come to shove, they'll have one another's backs. Plus, she's got a place to stay whenever she's round Maldon way.

Betsy Braddock was born a nice blonde English girl and now lives in the body of a Japanese assassin. This isn't really a flaw because it doesn't really bother her, but it can make life a bit complicated sometimes.

The people who /put/ her in the Japanese body, though -- the Hand -- are a cult of evil ninja assassins who are still a bit sore that she betrayed them. They wouldn't mind stabbing her, possibly even with swords. This can also make life inconvenient.

Psylocke tends to come off as a snob. This is because she is a snob. She's a generally good-hearted snob, though, but it's pretty easy to get the wrong impression. Her discipline and focus can also be mistaken for further aloofness -- time for play is time for play, and time for work is time for work, and sometimes reconciling these two sides of herself can paint a jarringly contradictory picture.

Despite being one of the X-Men, living on the grounds, and so on, Psylocke has consistently declined a teaching position at the Xavier Institute. This is not horrible, but it does put a bit of a damper on her ability to get along with the students, because she doesn't really make any effort to get to know most of them, and most of what they know about her comes from gossip and chinese whispers.

2010-08-15: Sweating to the Hologram Robots: Psylocke and Cyclops get a Danger Room work out

Retrieved from "https://uumux.fandom.com/wiki/Psylocke?oldid=5627"
Community content is available under CC-BY-SA unless otherwise noted.