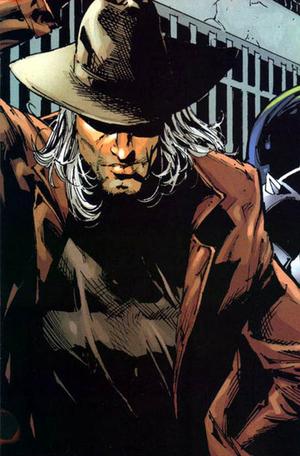 "I hear a lot of stories like that on the road. About a Resurrection Man who can't lay down to die. Some of them are bad. Heard tell of a deathless vagrant who slays the poor folk who stop to give him a ride. They say he takes his sustenance from them...."

Mitchell Shelley, "Mitch" to his friends, is an ex mob lawyer whose life was turned upside down when he was experimented upon by a scientific organization known simply as "the Lab". He lost his memories but he gained the ability to resurrect from death within a few moments, each time with a new power. He became Resurrection Man.

While Mitchell Shelley's soul has been reincarnating since the days of Neanderthals, this particular life started out pretty simple. Born to a normal family in Viceroy, South Carolina, Mitch grew up like any other kid, went to school, and got a job. He put himself through law school, got married, and made a name for himself as a good lawyer. He wasn't the very best, but he was still very good. And he asked a high price for his skill. He wasn't a particularly nice man, either...he didn't take cases if his prospective client looked like he or she wasn't going to be able to pay him.

All that changed when he took on a member of the mob in Viceroy as a client. He was for refusing, but the mobster told him that he would be paid well for his services. Mitch took advantage of this assurance, and charged an extra high price. Fully assured that he'd get his payment, Mitch defended the mobster, and got him acquitted. But one day, disaster struck -- his office was bombed. The police later said it was by people who were angry that he got the accused murderer acquitted of the crime.

In truth, it was done by the mob, who was angry that he was making noise for more money. And it was assisted by his wife, who had found another man, the mobster that Mitch had defended, and wanted her husband out of the picture without divorce. Happily believing him gone, she played the part of the grieving wife...and then went off to her new life with the mobster.

Unfortunately, it didn't go as planned. The people who'd set the bombs found Mitch wandering aimlessly around the destroyed building following the explosion. Rather than shoot him and have his body be found, they took him to a laboratory that had worked with the mob. Known simply as "the Lab", this place had been experimenting with nanomachines in the use of regenerating damage. All their experiments had failed.

However, when Mitch was experimented upon, the infusion of nanomachines -- they were called "Tektites" -- activated an unknown meta gene within him. His cells bonded with the Tektites and they seemed to repair the damage that Mitch had suffered in the bombing. But they went dormant after that. Unfortunately, Mitch also lost his memory.

Amnesiatic or not, it didn't take Mitch long to decide he didn't want to stay at the Lab. That very night, during the experimentations, Mitch somehow managed to escape. He was injured in the attempt, and as he made his way into the city, a group of muggers saw him in his nice suit and thought he'd make an easy mark. He was beaten and stabbed, and then tossed off the roof of a multi-story building for good measure. It was there that Mitch died.

But a few moments later he woke in an alley, shorn of his wallet (and his ID). He remembered being stabbed, he remembered the feeling of falling. But he was still alive? There was no scar where he'd been stabbed; had he dreamed it?

He remembered nothing more about himself than his name -- Mitch Shelley. And even that he wasn't sure about, since he didn't have any ID on him. He also knew that there was someone after him. He couldn't remember who. But he knew they weren't nice people. He went on his way, living as a wandering homeless man, never trusting anyone. He would soon discover his newfound "gifts"....

The soul of Mitchell Shelley has seen a lot of lives, and been through a great deal in those lives. The great deal he's been through has begun to make him jaded, cynical, and untrusting of others. He believes that there's no method to the madness of life, and is about as close to an atheist as a Southern boy can get -- either there's no God, he figures...or God just doesn't want him for some reason.

Because he knows he's being pursued, Mitch finds it hard to trust people, as he never knows when the next person he meets is going to be one of those unknown people after him. He's also very suspicious of people in general, and often looks around him nervously. And that makes one look suspicious. Plus, he's apt to run if he's stopped by police, making him seem even more suspicious!

Dying and then coming back to life has a certain way of making one much less inclined to be surprised at things. This can make him seem cold or uncaring at times, though that's far from the truth. He's just unfazed by a lot of things that would shock or surprise most.

Knowing that one can't truly die, or that one will come back if he does, is a surefire way to get a man to do stupid things. After his first death, it will be to test whether he really can come back from the dead. Once he realizes it's true, it'll be because he really doesn't care. Either way, he's the reckless sort, one who charges in without fear for his own safety.

Despite his previous life as a sleazy, rather money-grubbing lawyer, Mitch is a kind, caring person who will do anything to help someone he thinks he can assist. And if he can't, he's going to find someone who can. Even if he has to, say...run into the street to stop a police car....

Resurrection: Can resurrect himself, no matter what it was that killed him. "Deaths" last mere minutes. He resurrects with different (staff approved) powers every time. Even if his body is destroyed, the "Tektites" in his body can rebuild it. He cannot lose this power, though he loses other powers for his new ones.

Super Strength: Lifting strength 10x human norm, and he can likewise deliver punches with about 10x the force of a normal human.

Flight: Max altitude 1000 feet, max speed 50 mph. As he's not accustomed to being able to fly, if he falls and it's a short drop (a story or less), he's unlikely to be able to activate this in time to prevent the fall.

Brawling: No formal training. Can defend himself against up to 6 common thugs (10 when he has super strength) or a single mildly-skilled combatant. Highly skilled combatants and large groups of twenty or more are beyond his capabilities.

Fast-Talking: Using mainly observation of visual clues and knowledge about his target audience's lifestyle, Mitch can almost unfailingly say exactly what his target wants to hear. Whether it's true or not.

Law: Mitch has knowledge of proper law procedures in the USA, and may possibly be able to quote actual cases -- i.e., "According to 'People v. Kelly', dismissal should not be used where less drastic measure can rectify the harm done by the loss of evidence."

Sense of Direction: Most cities are built under similar conditions. While he may not know EXACTLY where he is, Mitch can usually find his way to the homeless-friendly parts of town.

Survival: Most of Mitch's survival abilities pertain to cities -- he knows when the fast food places throw out their unsold food, how to get over/under fences and barriers, where the shelters are. And when that fails, what bolt holes he can sleep in.

Homeless People: Mitch can easily make friends with the homeless population of almost any city. They can't offer much aid financially, but they can hide him when necessary.

Law Degree: Should Mitch ever choose to come out of retirement, he can easily make a living as a lawyer. Of course, this would tell the people who are chasing him that he's not dead....

Tektites: These are microscopic nanomachines that were artificially infused into the cells of his body. They use nearby molecules to repair and recreate damaged and/or destroyed cells of Mitch's body. Normally this takes only a few moments.

Amnesia: The experiment that gave Mitch his resurrection power also robbed him of his memories. With each new death, he gains a new piece of his past. At this rate, it will take some time to remember everything.

Always Learning: Each time Mitch dies, he gets new, different powers. But this means a whole difference learning curve each time.

Can't Die Permanently: While this might seem to be good at first, the reality is that Mitch will watch everyone he cares about wither away and die, while he remains unchanging.

Death Required: If Mitch doesn't have a power or skill to get himself out of a situation, he's going to die. And though he won't die permanently...dying still hurts!

Homeless: Being homeless, Mitch is not fettered to one place or another. Unfortunately he also doesn't have a regular place to stay on cold nights or in bad weather, and he never knows where his next meal is coming from...or if he's going to be able to find a next meal.

Hunted: While the mob thinks he's dead currently and aren't looking for him, the laboratory that gave him his Tektites knows better. It's hard to say who's the more dangerous adversary....

Legally Dead: According to records, Mitchell Shelley is legally dead. This means that he can't access any of the funds or assets he has...even ones that he actually remembers that he owns.

Randomness: Mitch never knows what his lot's going to be when he resurrects. So it's possible he may go from one death to the next and not even know what powers he has! 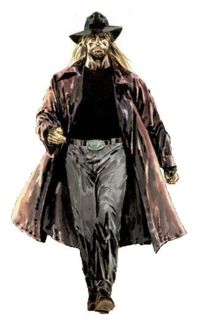 Retrieved from "https://uumux.fandom.com/wiki/Resurrection_Man?oldid=5504"
Community content is available under CC-BY-SA unless otherwise noted.